Kyowa’s instruments were certified as “Analytical and Scientific Instrument Heritage” in 2012, 2013, and 2015. 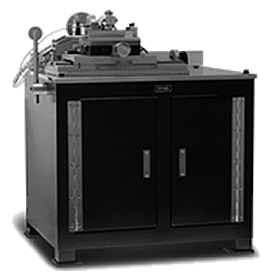 During this period of high economic growth in Japan, the demand of households such as camera, the automobile has increased so fast, so that manufacturers needed to have information of not only static but also dynamic friction value for the research and development to design such new products, then KYOWA released for their R & D needs a new friction meter accommodating the Bowden type mechanism by horizontally sliding a subject back and forth.

In an early stage of the development, our engineers were confronted with the issue of unstable friction forces particularly in the range of heavier weight. These were due to a proper oscillation caused by a moment of inertia of the balance which sensor was affixed to it.

By changing the mindset that we avoided setting weight on the top of the arm of the balance, a weight should be put underneath of balance by using a horseshoe-shaped rigid steel arm. This innovative modification made it possible to obtain not only stable data and but also to measure static and dynamic friction in the same position.

By the difference between static and dynamic friction, the stick-slip-phenomenon could be well measured and was therefore utilized in the research and development of tires, grease for aircraft, roll film winding mechanism, etc. contributing significantly to the development of new products at that time.

Forerunners, including the founder of our company, elaborated on creating the friction meter under the adverse situation in which an accurate sensor was not available at that time, they challenged to invent a handmade strain gauge as a sensor by themselves.

Again, we can confirm the founder Mr. Tomoji Kamei’s firm intention that he put the title of documents to take over to the current president Mr. Shinichi Kamei son of him was “Science of Friction”. This spirit now lives on in our new friction-abrasion meters, such as the TS-series.

The achievable resolutions with the du Noüy ring method were about 0.5 to 1 mN/m, whereas our Wilhelmy plate system combined with our innovative lamp-scale could attain a precise resolution of 0.1 mN/m. In addition, measurements of the surface tension as a function of time and evaluations of dynamic processes of surfactant adsorption and the equilibration of surfactant solutions, not possible with the du Noüy ring method, became possible with our system, contributing considerably to the development of our country's chemical industry.

Kyowa Kagaku Seiki (the predecessor of Kyowa Interface Science Co., Ltd.) released the first contact angle meter that adopted the tilting-plate method, which is the evaluation index for “wettability”. It adopted the θ/2 method (the method to connect the apex and the end two three-phase points) in the sessile drop method, the mainstream measuring method now, for the first time to reduce personal errors.

It took time for the drop method at that time, during which it faultily made liquids vaporize from osmosing. It is easy to measure changing wetness of evaporable liquids of surfactant solutions in the tilting-plate method. The method also has the advantage that pole-shaped samples are measurable. Furthermore, the mechanism of the tilting-plate method was applied and the dynamic contact angle measuring meter, measuring with the “falling method” (that tilts stages to drop liquids), was developed.